This was my very first time at the nation’s capital! It was a great trip filled with very much overdue best friend bonding, a hop-on-hop-off bus with endless sightseeing, and a Beyoncé and Jay-Z concert.

I was in D.C. for a long weekend, and that still wasn’t enough to do all of the sightseeing. However, my two-day pass for the hop-on-hop-off bus tour made it a little easier, and in the end, it was still fun to play tourist for four days!

I could list all of the places I went and things I saw and what I liked and disliked, but that would take far too much time and patience. So, here are pictures from the highlights of my trip!

I will say, however, the Bey and Jay concert was unreal and my life will never be the same, I geeked out at the Newseum since I dedicated 4 years and tens-of-thousands of dollars for an education in journalism, and we ate at a Spanish restaurant that made us completely nostalgic about our study abroad days. 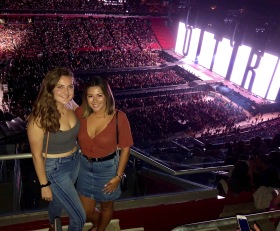 Thanks for stopping by :)

To have the courage, confidence, self belief, and self-determination to go out there and work it out until you find the opportunities you want in life.